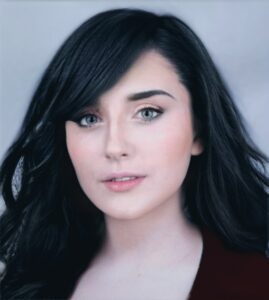 Rebecca studied Theatre at the Brit School for Performing Arts and Technology. After graduating, she worked with Prospero Theatre as a facilitator and director for inclusive arts. She wrote and directed as part of the Inspiring Change Festival, which toured throughout the UK in 2018. In addition, Rebecca worked on the Mind Fit and Creative project, delivering numerous Mind Fitness projects in schools and online webinars.

Whilst continuing with her facilitation work, in late 2018, Rebecca co-founded Volition Theatre, a theatre company that was originally based in Wales, producing two feature-length stage productions of which she directed, including Boot, 2018 and Mercy 2019. Since moving the company down to London in 2020, during the lockdown, Volition produced Walls (radio play) and co-directed an online murder mystery for the Mayor of Croydon’s charity fundraiser in 2021. During this time, she has also begun to study BA Drama, Applied Theatre and Education at the Royal Central School of Speech and Drama.

Other acting work includes; Elephant of my heart at the Brighton Fringe, Red and the Wolf at the Edinburgh Fringe.